Why relief pitchers get ignored by collectors

There is a new debate in baseball circles about the value of relief pitching in winning ball games.
The rule of thumb always was that relief pitching is one of the secondary needs a baseball team should worry about.
But then a strange thing happened. In 2015, Kansas City won the World Series with a below average starting rotation and a lights out bullpen that could shut out a team over the last three innings of game. 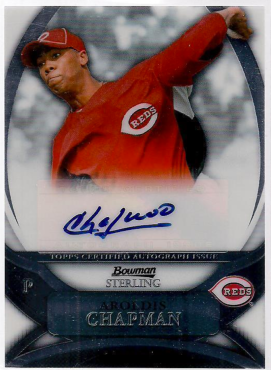 Last year Cleveland almost won it all, and one part of their strategy was deploying their best reliever Andrew Miller not in closing situations, but whenever the opposing team’s best players came up to bat – even if it was in the 6th inning.
Relievers have always been ignored by baseball card collectors in favor of position players and then starting pitchers. As a fan of baseball, and especially the strategic part game, it is very interesting to see managers have an open perspective on their bullpens.
But even though we may find ourselves in a potential reliever revolution, buyers would be best off looking elsewhere for an investment.
The two issues with any investment in a baseball card belonging to a reliever is unpredictability and overall impact on the game.
When it comes to forecasting expectations of a baseball player over a period of time (one year, three years, an entire career) the most difficult position to do this for is the relief pitcher.
If you are looking for a short-term investment, you’ll need to navigate injuries (remember Greg Holland), surprising demotions (Trevor Rosenthal) and trades, which can alter their role in the bullpen.
If you are looking for a long-term investment, then the potential of an injury from throwing all those high stress pitches becomes even more worrisome, even if the reliever is a stud like Aroldis Chapman or Kenley Jansen.
Remember how incredible Eric Gagne was? He won a Cy Young award in 2003 and had an incredible run as the Dodgers closer from 2002-2004. Unfortunately what followed was elbow trouble, and eventually a couple of surgeries and he was unable to reclaim his spot as an elite closer.
Game impact is the factor that is a bit more contentious (and could be impacted by the reliever revolution). The overall argument is that over the course of a season (and a career) a reliever simply cannot have the impact other players do because they play less. A relief pitcher after all may only play a third or a quarter of the innings a starter would and that matters.
For card collectors, the most important number is the number five, which represents the number of relief pitchers inducted into the Hall of Fame (HOF). Trevor Hoffman should get inducted in 2018, and Mariano Rivera is a lock for induction, but that only brings the number up to a potential seven.
Part of that is due to the difficulty of having a long and dominant career as a reliever as noted above, but part of it is that relievers face an uphill battle from the HOF voters because many are skeptical on how much impact a reliever can truly make.
Using a metric like WAR reveals that many top relievers like Gagne and Hoffman will register a career total in the high 20’s. Most position players are expected to have a career WAR in the 60’s to have a good shot of induction.
So if you are thinking about cards to invest in, a card belonging to a relief pitcher probably won’t net the return you are hoping for. But there is a silver lining, and that is cards belonging to relief pitchers are not too expensive.
If you want to buy the rookie card of your favorite reliever as a fan and not an investor, go for it. While we like to talk about cards as investments, everyone should be thrilled with picking up a card of one of their favorite players.
DK

0 thoughts on “Why relief pitchers get ignored by collectors”