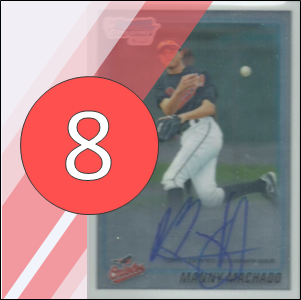 Both are considered the top defensive third basemen in their respective leagues, have finished in the top five in 2016 MVP voting, and offer tremendous hitting and run production at the plate.
So what gives Machado the slight edge at the moment? Why are collectors willing to spend a little more on him over Arenado?
When comparing great players, sometimes we need to split hairs to differentiate one above the other. For now, Machado has played an extra season in the majors, put up a higher career WAR (24 vs 20) and is a year younger than Arenado (24 vs 25). That Machado also plays for a relatively higher profile historical team in the American League East also doesn’t hurt for driving his value up a bit more among collectors.
2017 will be an interesting year for Machado. He has been relatively consistent as a 7 WAR player in 2016, 2015 and 2013 but does he have another level in him?
There is room to improve his on base percentage (OBP) which is holding him back from registering an .900 OPS thus far in his career.
If Machado takes the next step this year, then collectors who have just bought in will be excited to have his card value grow higher this time next year. If Machado maintains his current production then there’s no reason to panic.
But don’t be surprised if he and Arenado switch spots when we check back in on the most valuable Bowman Chrome auto cards next season.
Previously in the top 10 Bowman Chrome auto countdown:
9 Nolan Arenado
10 Mookie Betts