Now that was fast.
After recently being called up to play for the Triple-A Pawtucket team, top prospect Rafael Devers will be promoted again and join the Boston Red Sox tomorrow. 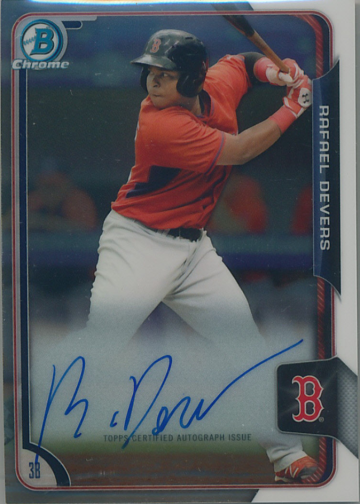 After letting go of Pablo Sandoval, the Red Sox were in need of a more reliable third baseman. Rumours circulated that Todd Frazier might have been acquired from the Chicago White Sox, but he was traded instead to the New York Yankees.
While Devers was seen as the third base man for the big league club in the near future, apparently for Dave Dombrowski, the Red Sox president of baseball operations, the future is now.
Devers has certainly earned the call up batting over .300 and hitting 20 home runs in about 350 at bats combined over two minor league teams.
But will that translate right away with the Red Sox?
When it comes to collecting though, it doesn’t really matter. You can automatically expect his 2015 Bowman Chrome autographed rookie (BGS Graded 9.5/10) to increase with news of his call up – and it has.
It’s currently on sale on eBay for about $350. Earlier this month, it was valued at $210.
Everyone loves prospects.
CK