EDITOR’S NOTE: The card below sold for $152.50. Good deal based on what previous cards sold for recently!
The Chicago Cubs have done a great job with their farm system and Eloy Jimenez is no exception. 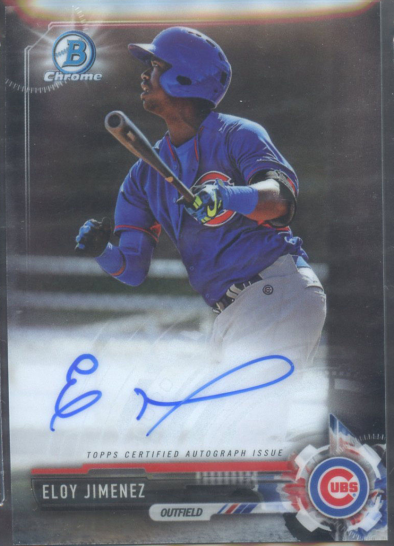 He’s only 20 years old but a lot of scouts are expecting big things from the top prospect outfielder.
Certainly the Chicago White Sox organization does as he was arguably a key piece in the trade for Jose Quintana.
While he may be some time away from being called up, it’s not too early to look into picking up his rookie card.
Here’s one for Jimenez with bidding ending Aug. 1, 2017 at 9:36 p.m. that could be had for fair current market value.
CARD: 2017 Bowman Chrome Prospect base autographed rookie (BGS Graded 9.5/10)
CURRENT BID PRICE: $115.50 (as of 12:15 a.m. on Aug. 1, 2017)
SUGGESTED MAX PRICE: $190 (There was one that was sold early July for $186.50 with a couple of other cards more recently sold in the $200 range. There’s a Buy It Now option for $205 here, which also includes 2014 Bowman Chrome Draft Refractor non-auto rookie!)
AUCTION ENDS: Aug. 1, 2017 at 9:36 p.m. EST.