Dansby Swanson vs Gleyber Torres: whose rookie card should be worth more?

Check out our Daily Auctions page, to see some of the best sports card auctions ending daily! And come join the fun on our podcast Cards To The Moon with new episodes dropping every Tuesday!

When MLB.com released its latest rankings of the top prospects in baseball, a couple of shortstops leaped into the top 5. New York Yankee’s Gleyber Torres found himself as the #3 overall prospect, and Atlanta Brave’s Dansby Swanson landed right behind him at #4.
If a card collector could only choose to invest in one the two stud shortstop prospects, who should it be?
Despite placing one after another in the prospects ranking, Swanson and Torres present collectors with two very different investing strategies.
Dansby Swanson

Swanson was drafted in 2015 out of Vanderbilt after winning the College World Series and was well regarded as a proven winner and clubhouse leader. He shows great patience at the plate, makes good contact, takes walks, and plays good defense.
Overall scouts describe him as the type of player that has a solid all-around game without any weakness, but also without truly elite athleticism, power or speed.
However, Swanson does have an elite quality, and that is his natural instinct for the game. That’s a quality that has helped Swanson to have a successful stint once he was called up by the Braves at the end of the 2016 season. Right now, the average selling price of his 2015 Bowman Chrome 1st base auto (graded 9.5) is $125.
Gleyber Torres 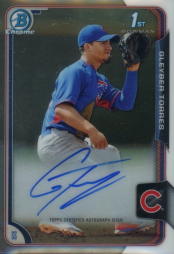 When it comes to Torres, it is all about upside. He is only 20 years old and might not reach the majors this year, but he is already making waves in the minors.
He was the 2016 Arizona Fall League MVP thanks to his .403 batting average, with scouts suggesting that as an overall hitter he has the potential to be in the class of Correa and Seager.
As a defender he has the skills to play shortstop at the highest level so there should be no concern there either. We previously reported that Torres’ rookie card value has been rapidly rising. The average selling price for his 2015 Bowman Chrome 1st auto (graded 9.5) is now $172.
Who would you choose?
As an investment, Dansby Swanson’s rookie card has a lot of appeal right now thanks to its relatively low price. He has already shown he can handle pitchers at the major league level, as well the chops to stick at shortstop long term. He is a great lower risk option.
Torres carries some risk because he hasn’t yet played in AA yet (he will start there in 2017). But anytime a prospect’s comparables include Seager and Correa, it’s hard for an investor to not be excited.
Leave your feedback on who you would invest in below in our poll.

0 thoughts on “Dansby Swanson vs Gleyber Torres: whose rookie card should be worth more?”