On the cover of Sports Illustrated magazine is what could arguably be the most talented, young outfielders to play on one team this season.
Anchored by Mookie Betts, 24, who had his breakout season last year along with Jackie Bradley Jr., 26, and top prospect Andrew Benintendi, 22, the Red Sox, post-David Ortiz, are top contenders again for a playoff run. 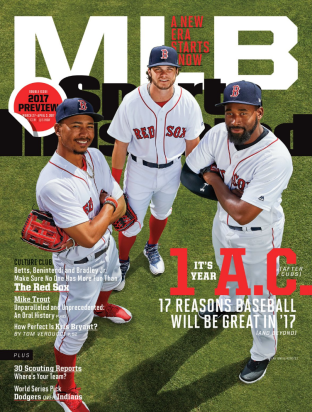 With the beginning of the season less than two weeks away, we should see the hype on young star players die down a little and possibly the value of their baseball cards level off.
That is unless they continue to play up or even close to their expectations in which that buy low window for a quick flip is shut for the rest of the season.
It’s probably already too late to get “good deals” for any of Betts’ rookie cards as his talent looks legit and is expected to continue playing at a high level.
Bradley Jr., the oldest of the bunch, still has potential room to grow but his ceiling is not as high as the other two outfielders. His current value at around $100 for his 2012 Bowman Chrome base auto (BGS Graded 9.5) should be steady throughout the season unless he takes his play up a notch or two consistently.
The one to really watch for is Benintendi who comes into the season as the number one top prospect and depending on how he performs, he has the potential to surpass even Betts’ rookie card value.
Here’s hoping for an exciting 2017 baseball season for the Red Sox and their young stars.
CK

For some of the best sports card auctions currently listed, check out our Daily Auctions page (link in menu) which is updated regularly!