Will the Dark Knight rise? The return of Matt Harvey

New York Mets pitcher Matt Harvey is a fascinating player to follow.
His stuff is electric, he embodies the persona of a star player playing in New York, has plenty things happening behind the scenes, and to top it off, has one of the best nick names in baseball, the Dark Knight.
There was a time when Harvey looked like he would push his way into the conversation for the second best pitcher of this generation (behind Los Angeles ace Clayton Kershaw). Unfortunately, injuries would prove to be a major barrier in his career development along with a very subpar 2016, to push him out of the conversation. 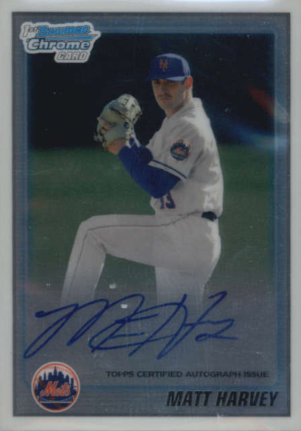 Harvey is hoping to bounce back this year in a big way, but will he be able to rise up from his latest setback? Should collectors consider jumping in while a buy low window is open? Here is our analysis of Matt Harvey’s progress as outlined by Christopher Nolan’s Dark Knight Trilogy.
2012-2013 Matt Harvey Begins
Harvey was first called up in the 2012 season and was quite successful registering an ERA of 2.74, a 1.15 WHIP and 10.6 K/9 – but that was just the beginning. He would fully breakout in 2013 and capture the attention of the league registering a 2.27 ERA, 0.93 WHIP and 9.6 K/9 while finishing 4th in the National League Cy Young voting despite only pitching 178.1 innings.
During this time, Harvey received some incredibly high praise from other players including Pedro Martinez who went on record to say that he could become an even better pitcher than he was.
2014-2016 The Dark Knight
Unfortunately, the good times had come to an end in August of 2013 as it was discovered that Harvey partially tore his UCL and was forced to undergo Tommy John Surgery. As a result of the injury he would have to miss the remainder of the 2013 season and all of the 2014 season.
Harvey would fully recover and return in 2015 to put up a strong 2.71 ERA, 1.02WHIP and 8.9 K/9 in 189.1 innings and contribute as part of the powerful starting rotation that would lead the Mets to the World Series, only to lose to the Kansas City Royals in 5 games.
The 2016 season opened with huge expectations for the Mets and Harvey, but then Harvey took a giant step backwards and did not look anything like the pitcher the world has come to know.
His velocity was lower, and he struggled with his command. His walk rate jumped from 1.8 BB/9 to 2.4 while his strikeouts decreased to 7.4 K/9. And when hitters did make contact, they connected for hard hit line drives.
When the season concluded, Harvey’s stats implied that he pitched at the level of a replacement player (he finished with a 0.0 WAR) compiling a 4.86 ERA and 1.47 WHIP. Throughout the season, it was a mystery why Harvey was struggling so much, and then upon being shut down we learned that he was dealing with shoulder pains and eventually underwent surgery for Thoracic Outlet Syndrome (TOS), having a rib removed in the process.
2017 Will the Dark Knight Rise?
With a new season upon us there are two questions collectors need to ask. The first is, can the Dark Knight rise again and show that he is recovered from his latest injury? The second question is, can he still have a dominant career that many were predicting back in 2013?
The good news for the short term is that from the small sample size we have so far, pitchers recovering from TOS have resumed to pitch at the same level before their injury. FantasyPros wrote a great article on this topic, and provided an in depth analysis by looking at past examples of pitchers returning from TOS.
The bad news is that many pitchers struggled to comeback and pitch a heavy workload, which creates some significant short term risk for potential investors.
Over the long-term, Harvey is now beginning to be pressed for time to build up a Hall of Fame resume. He is now in his prime at age 27, and if he cannot put together a strong season (5+ WAR) this year than his back will be up against the wall.
It does not help as well that Harvey has now already lost two seasons to injury , raising serious concerns about his durability and if he even will have enough healthy seasons in him.
Harvey is incredible when he is on and has the personality to match the New York market he is pitching in. But there is just too much risk to stomach making an investment even through the price looks inviting (his 2010 Bowman Chrome base prospect auto can be had for under $100).
If Harvey does come out and pitches anywhere close to his 2013 or even his 2015 numbers, then you can bet his cards will receive a boost in value. But before you take the plunge make sure you do your due diligence during spring training and be on the lookout for news on his progress.
DK

0 thoughts on “Will the Dark Knight rise? The return of Matt Harvey”