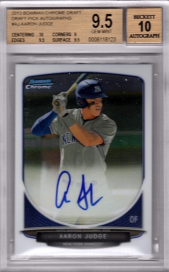 While his tremendous first half might keep him as the lead candidate for American League rookie of the year honours, his slump in the second half has opened the door to Andrew Benintendi now being in the conversation.
In the meantime, one of his 2013 Bowman Chrome base autograph (BGS Graded 9.5/10) has just been listed here on eBay for $509.99.
One Twitter follower (@fivecardguys) mentioned it would bottom out at $500.
But the speed at which the card value is dropping, it might very well go under $500. That is unless Judge turns things around.
Maybe he can take some notes from one rookie from the National League, aka Cody Bellinger, who has been able to continue to hit in the second half.
CK

For some of the best sports card auctions currently listed, check out our Daily Auctions page (link in menu) which is updated regularly!