No doubt Hank Aaron, aka “The Hammer”, who hit 755 homeruns over his career is one of the greatest ballplayers to play the game.
Along with his impressive homerun totals, Aaron also hit .305 with 3,771 total hits and knocked in 2,297 runs.
It goes without saying that Aaron’s 1954 Topps card, which is his only recognized rookie card, is extremely valuable especially . 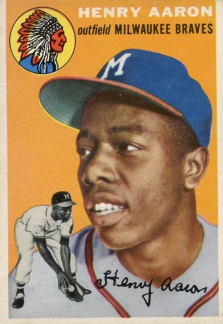 Player: Hank Aaron
Career: Played for the Milwaukee/Atlanta Braves from 1954 to 1974 and ended his career with the Milwaukee Brewers in 1976. During that span, he was a 25-time All-Star, won the National League MVP in 1957 to go with his World Series title. He was also an all-round player winning the Gold Glove three times from 1958 to 1960. Known for his homerun power, he captured the National League title of most homeruns in a season four times (1957, 1963, 1966, 1967).
Card facts: His 1954 Topps rookie card is Aaron’s only recognized rookie card. This iconic card was listed recently for more than $8,000 (PSA Graded 7 – NR MT).