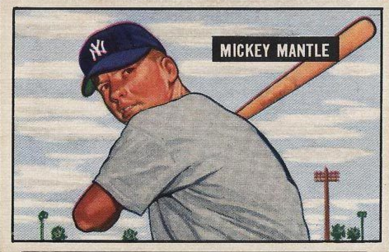 Player: Mickey Mantle
Career: Played for the New York Yankees for the entirety of his career from 1951 to 1968. “The Mick” was known for his power bat, clubbing 536 total Major League homeruns while batting over .300 ten times. He was inducted in the Baseball Hall of Fame in 1974.
Card facts: His 1951 Bowman #253 is the only rookie card recognized by collectors belonging to the Yankees slugger. Like many cards of this era, it’s difficult to find one in mint condition due to spacing and centering issues.
On sale: Currently on sale for $26,355 as of April 9, 2017 for a PSA Graded 7 (Near MT) with a day left until the auction ends.