Arguably the greatest baseball player of all time, Babe Ruth’s name is synonymous with the sport of baseball.
His stats as both a batter and a pitcher speak volumes, and the legend of Ruth continues to grow each passing day with a number of movies, television features and books devoted to him.
Any of his cards in mint condition would be valued incredibly high like the one from the 1923 W515-1 strip card set. 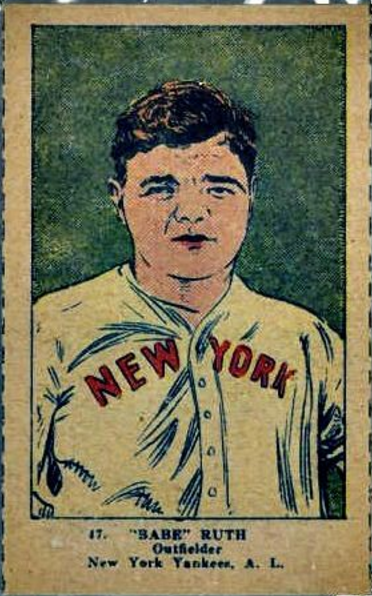 Player: Babe Ruth
Career: From 1914 to 1935, Ruth played 22 seasons starting his career as a Boston Red Sox pitcher and ending it off as an outfielder with the New York Yankees. Over his career, he hit an incredible 714 homeruns, knocked in 2,213 RBIs and a slugging percentage of .6897. In 1936, he was named to the Baseball Hall of Fame as one of the five inaugural members.
Card facts: This card of Ruth is one of two found  in the 1923 W515 strip card set. Many of the ones found are in poor condition with creases and cut corners. But there is one as of June 13, 2017 that is graded by PSA in Gem Mint condition worth six figures.
On sale: Currently on sale as of June 13, 2017 for $175,000 for a PSA Graded 10 until the bidding ends.