We brought this up before when we compared the rookie cards of New York Yankees phenom Aaron Judge versus Washington Nationals superstar Bryce Harper. 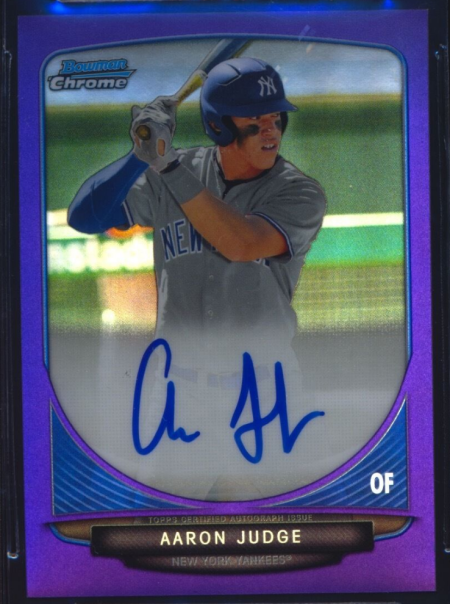 But the question of whether Judge’s card is overvalued and overrated has come up again in Forbes (especially after a dominating first half performance capped earlier this week with his very impressive home run derby appearance).
An Aaron Judge BGS Graded 9.5/10 Purple Refractor of his 2013 Bowman Chrome Draft rookie card sold (/10) recently for nearly $15,000.
As the Forbes article noted, sure he could be the next Joe DiMaggio or Mickey Mantle, but he could also be the next Kevin Maas. Remember him?
Only time will tell.
But for now, to just put it into perspective, I think I’d still rather have the 2011 Bowman Chrome Prospect GOLD refractor numbered to 50 (BGS Graded 9.5/10) on eBay at $9,999.
CK