In 2015, Beckett published an engaging article, which identified Paul Goldschmidt as one of the best players to invest in as a card collector due to his rookie cards being so undervalued.
In their article they compare the career production of Goldschmidt to Trout and Harper and point out that while it will cost $500 for Harper’s Bowman Chrome base auto prospect card, and $1,500 for Trout’s, a collector could get their hands on Goldschmidt’s 2010 Bowman Chrome base auto for just a fraction of the price at $150. 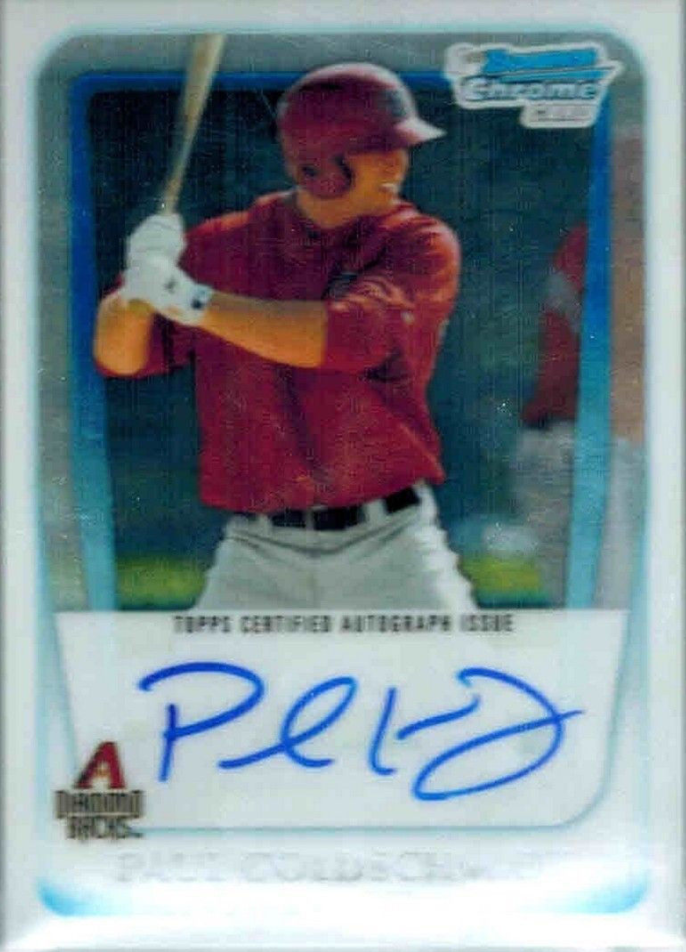 Another season has gone by and both Trout’s and Harper’s cards have seen their values rise (despite Harper’s disappointing 2016), while Goldschmidt’s card can still be purchased for $150.
Goldschmidt may not have replicated his MVP caliber 2015 season last year but he was a still solid .297/.411/.489 while leading the NL in walks, and swiping a career high 32 stolen bases, which is ridiculous for a first baseman.
Some were a little worried that the power numbers were down last season (“only” 24 HRs, and a slugging percent below .500 for the first time since 2012), but entering the 2017 season, he is still just 28 years old and has already accumulated a career 29.0 WAR.
Goldschmidt’s offensive game is one that should age quite well into his early thirties, which would give him 4-5 years of solid production, and if the power returns, great production before decline really takes effect.
Let’s assume that Goldschmidt stays healthy for the next five years, and his 2016 season represents the new average production going forward with perhaps a few less steals. Under these conditions he will likely still be a .300 hitter, and have accumulated 260 career HRs, 1000 RBIs, 1000 runs, 175 stolen bases and 53 WAR by age 33.
He’ll still need to put up good numbers in the later part of his career to build up his Hall of Fame credentials, but it is clear there is a path for how he can get there.
If you are looking for a card to invest in right now, try looking past all of the overvalued prospects whose prices have sharply risen over the long offseason due to the usual work of the hype machines, and invest in a current top 10 player who will cost you less.
DK