The Chicago White Sox prospect Lucas Giolito, who was once considered a top 3 MLB prospect coming up in the Washington Nationals farm system, has seen his stock plummet over the last season.

Congratulations to the great Washington Nationals ace Max Scherzer who just achieved his sixth straight season with at least 200 strikeouts. We also look at three of his autographed “rookie cards.”

Because of his injury, there might be a small window of opportunity to buy low. Here’s one card to watch for the next five hours (auction ends 8 p.m. on July 24, 2017).

In the collecting world, it’s easy to see how many are attracted to the shiny new thing like the next top prospect to be called up that has superstar potential.

Has Bryce Harper passed Mike Trout as the better player?

They’re both generational talents that came up at roughly the same time. As a result, the Bryce Harper versus Mike Trout debate was bound to happen.
But I’d argue the general consensus has been that Trout has the edge with his stellar stats throughout his career playing on a mediocre team. Speed, power, defence – Trout has shown his talent on a consistent basis. 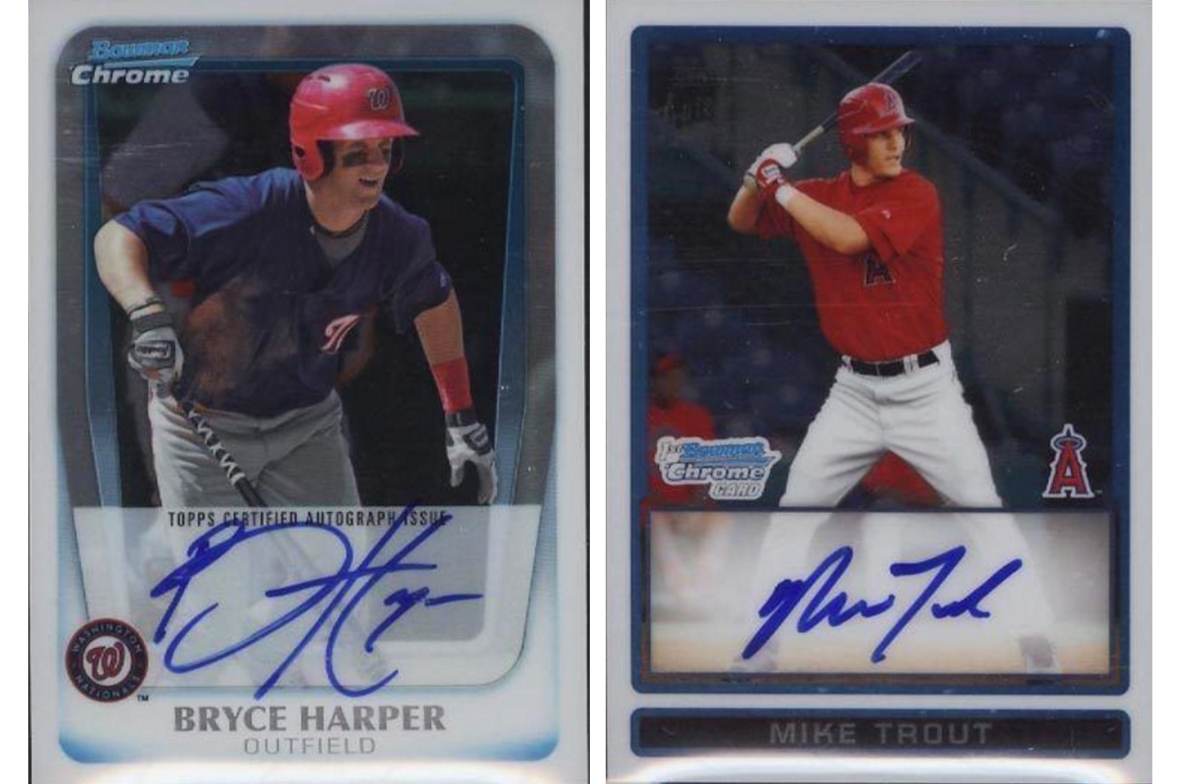 Bryce Harper vs Mike Trout: Who do you choose?

Harper on the other hand had one amazing season followed by an injury-riddled one, subsequently followed by another fantastic season in 2017.
The rare game last night between the Washington Nationals and Los Angeles Angels showcased both players, and neither disappointed.
But looking past the one game last night, Trout was rookie of the year and has two AL MVP awards and is a six-time All-Star. Harper also won rookie of the year, has one NL MVP and is a five-time All-Star.
Read More »Has Bryce Harper passed Mike Trout as the better player?

Washington Nationals pitcher Stephen Strasburg seems to have an unfortunate reputation of being injury prone, which is subsequently impacting his card’s value.

Bryce Harper vs Aaron Judge: Whose card would you rather have?

It’s amazing what Aaron Judge is doing right now with the New York Yankees well on his way of capturing the American League rookie of the year honors.
Already hailed by some as the heir to Derek Jeter, Judge is hitting his way into the hearts of Yankee fans with his explosive start to the 2017 season.
Halfway into June, he’s already hit 22 homeruns with 58 runs and 49 RBIs while batting a .335 average.
Unsurprisingly, his 2013 Bowman Chrome Draft base autographed rookie (BGS Graded 9.5/10) has skyrocketed in value over the past two months going from $99 to $1,399.

But is he better than Washington Nationals superstar player Bryce Harper who is also having a sensational season this year?
Like Judge who struck out a ton last season, there was similar concerns whether Harper can put up a season that many scouts and analysts felt he was capable of playing.
Read More »Bryce Harper vs Aaron Judge: Whose card would you rather have?

How fun would it be to collect a journeyman’s card from each team he’s played for.

What’s often neglected in the success of a professional baseball player is that good health throughout one’s career is vital to being considered an elite player.

Worthy of a Topps Now card?

What a Memorial Day game it was for those watching the Washington Nationals vs. the San Francisco Giants!