EDITOR’S NOTE: The card below sold for $260. Not a great deal considering there was a Buy It Now option for $249.99 (it has since been raised to $299.99 recently, see link below)
The New York Mets top prospect who’s believed to be called up anytime now after the official MLB trade deadline is Amed Rosario. 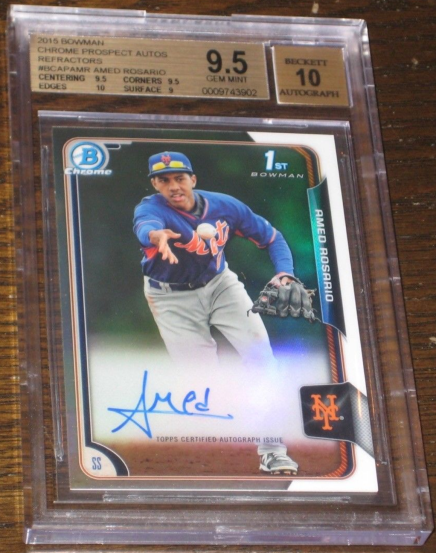 While the Mets aren’t really contending for the post-season this year, Rosario once he’s called up should then have ample opportunity to showcase his talent.
If he continues to hit well as he has in the minors, Rosario could be another prospect whose stock is on the rise. Here’s one rookie that’s on the auction block now (as of July 30, 2017), which could potentially be bought for good current market value.
CARD: 2015 Bowman Chrome Prospect base autograph rookie (BGS Graded 9.5/10)
CURRENT BID PRICE: $155.50 (as of 10 a.m. EST with about 11 hours left in the auction)
SUGGESTED MAX PRICE: $185 (Another base autographed card with the same grading sold on July 13 for $187.50. That seems to be good market value currently for this card. There is also a Buy It Now price of $249.99.)
AUCTION ENDS: July 30, 2017 at 8:53 p.m. EST.