Congratulations to the great Washington Nationals ace Max Scherzer who just achieved his sixth straight season with at least 200 strikeouts.
Not Clayton Kershaw or Madison Bumgarner, but it’s Scherzer who is the only active player to accomplish such a great feat.

.@Max_Scherzer is the only active pitcher with six straight 200-K seasons. pic.twitter.com/GBtJIWbfip

There aren’t many early cards of Scherzer’s that features his autograph, but here’s a couple we found that would be a nice addition for any Nationals fan.

1. 2009 Topps Allen & Ginter autographed mini (BGS Graded 9.5/10)
Some consider this a rookie card although it was issued the season after he played his first Major League game.
And while not a full size card, this mini features nice, crisp autograph from the popular Topps Allen & Ginter brand.
This particular card (in the link provided) is currently on sale (as of July 28, 2017) for $179.99. 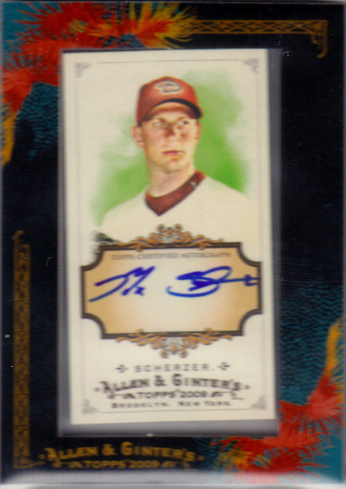 2. 2009 Topps Allen & Ginter autographed mini framed (BGS Graded 9.5/10)
Very similar to the card above, but this mini is the framed version with the Allen & Ginter branding on it.
It costs more than the regular mini card but it has the similar crisp, bold autograph.
This card (in the link provided) is currently on sale (as of July 28, 2017) for $299.99. A non-graded version of this card is available for $79 here. 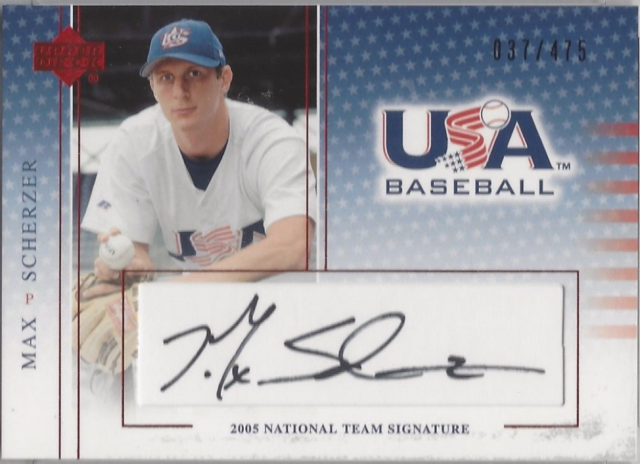 3. 2005 Upper Deck USA Baseball autograph card (PSA Graded 9)
Before he was called up to play in the Major Leagues for his first team, the Arizona Diamondbacks, Scherzer played for Team USA.
It predates his team rookie cards by three/four years (and also numbered to just 475). For hardcore Scherzer fans, this might be a must add.
Currently the graded card (in link above) is valued on eBay at $299. But a non-graded version is on sale for $159.