Mookie Betts, Manny Machado and others thank and Re2pect Derek Jeter in their own words

Now that the Yankees officially retired the number 2 in honour of Derek Jeter this past Sunday, the respect and acknowledgment for ‘The Captain’ keep rolling in. 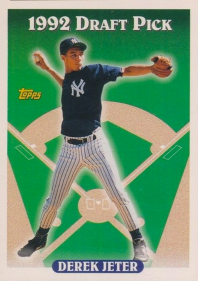 In this The Players’ Tribune article, current star players like Boston Red Sox outfielder Mookie Betts, Baltimore Orioles third baseman Manny Machado and former teammate CC Sabathia, all said a few words to thank Jeter for what he’s done for the game and for them personally.
It’s worth a read and reminds readers, fans, and collectors how much Jeter’s legacy is cemented by pretty much anyone connected to baseball.
The next thing to add to Jeter’s already lengthy baseball resume will most likely take place in 2020 when he becomes eligible for Cooperstown.
For collectors, Jeter’s rookie cards are almost a sure bet to increase in value. For Yankees’ fans, his cards are the ones you cherish forever.
Here’s a link for those interested in getting the Topps Now card featuring Jeter on his day in Yankees Stadium.
CK