Look out for Ryon Healy of the Oakland Athletics

The Oakland Athletics might be in the basement currently in the American League West division, but the team definitely has young building blocks to contend in the future led by rookie Ryon Healy. 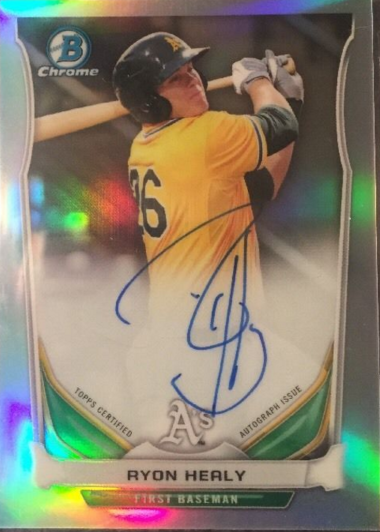 His 2017 season has gone splendidly well, currently batting .273 with 18 homeruns, 49 RBIs and 34 runs with less than 300 at bats.
A hot rookie playing for a bad team might suppress the card’s overall value, but it can also be seen as a buy low, longer-term investment.
His 2014 Bowman Chrome Prospect autograph rookie cards are very affordable with even many of the refractors at good value prices. For example, his refractor numbered to 500 recently sold for less than $70 (BGS Graded 9.5/10).
For Athletics fans and hobbyists, Healy’s card is one to have. All others, it’s worthwhile to see how he ends his first full season in the big leagues.
CK