He’s only 17 years old but the hype on the young pitcher who can throw 98 mph easily has already begun.
Hunter Greene seems to be the consensus top ranked MLB prospect who already has some lofty expectations placed upon him – ie. being called “baseball’s future saviour.” 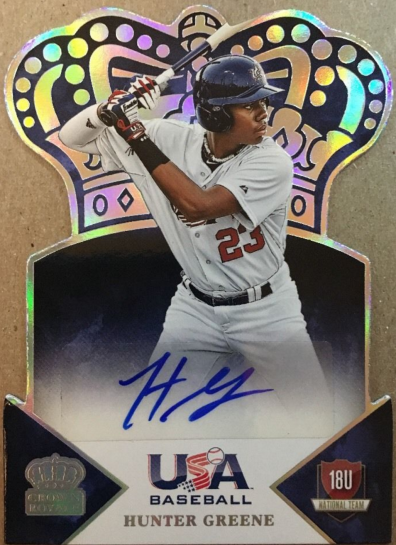 In this article on MLB.com, you can read what he’s all about in his own words. If you want a more objective view of his skills and talents, just Google his name and read about him in all the different sports websites.
Collectors in the hobby will have to wait for more of his baseball cards to appear as he works through the system.
But undoubtedly, his value will be at its peak immediately due to the hype. There might be a drop off as it is usually the case for most top prospects…or maybe he’ll be the next Kris Bryant.
Time will tell.
For those who can’t wait to get one of his cards, there are a few out already out including his 2015 Panini USA Baseball Crown Royale card with a sticker auto, a 2015 Panini USA 18U Team Signatures autographed rookie card, and the 2016 Panini Stars & Stripes USA autographed rookie card.
CK