Is Trea Turner’s move back to shortstop good for his card value?

For some of the best sports card auctions currently listed, check out our Daily Auctions page, which is updated frequently! 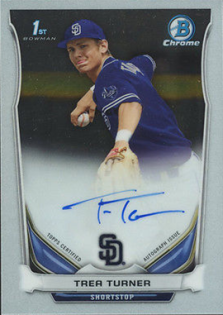 full season, there is a lot of excitement over Turner heading into the 2017 season.
The big news for Turner is that he will be making the move from center field, back to his natural shortstop position. Normally, shortstop is considered the weakest offensive position after catcher, but in 2017 he might have the most value by staying in center field.
After the 2016 Bleacher Report compiled a list of the best center fielders based on their production from the past season, by their standards in just half a season, Trea Turner did enough to rank seventh.
Over a full season it’s not hard to imagine Turner being the second best center fielder in all of baseball (behind just Mike Trout), and number 1 in the National League. His top competition would have been Charlie Blackmon, and AJ Pollock, and both are much older, with injury history.
The shortstop position, on the other hand has becoming surprisingly strong in recent years. At the top of the list are a few studs such as Carlos Correa and Corey Seager, but it’s also very deep as well. There is a mix of good young talent (Xander Bogaerts and Francisco Lindor) and capable veterans (Brandon Crawford and Troy Tulowitzki) that will make the position very competitive.
Even though we may be splitting hairs here, when it comes to statistics such as WAR, and WAA, it is not unreasonable to think that Turner might have a bit more value if he stays in the outfield. The positive part about Turner moving to shortstop is that it will always remain the glamour position of baseball, which collectors love.
In the fall, Turner’s 2014 Bowman Chrome base auto (BGS 9.5) was routinely selling below $200, which is a pretty good value. Unfortunately, we are in the middle of the winter inflation period where low supply is currently pushing prices up to almost $300.
If Turner comes out of the gate hot once the season begins and especially puts up strong defensive numbers at his natural position, consider giving him a look.
DK

0 thoughts on “Is Trea Turner’s move back to shortstop good for his card value?”