Is Cleveland Indians Francisco Lindor flying under the radar?

Cleveland Indians shortstop Francisco Lindor played the hero last night with a walk off homer against the Toronto Blue Jays. 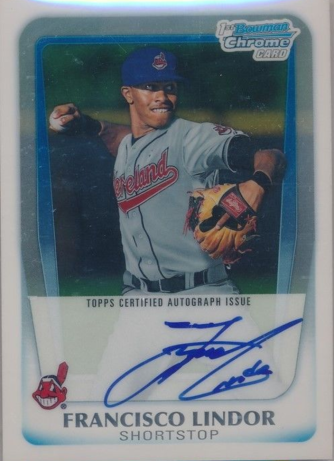 While Indians fans might be fully aware of his all-star talents both on the offensive and defensive side, is Lindor flying under the radar for fans and collectors elsewhere?
Lindor who was second in the American League Rookie of the Year voting followed up that season with a very respectable 15-home run, 19 steal season, while batting .301. This season he’s already matched his home run total of last season with 15 although his steals are down (4) and average is currently at .257.
Still, there’s plenty of games to play and Lindor was selected as an All-Star again this year. Plus his defensive skills shouldn’t be forgotten either.
His 2011 Bowman Chrome Draft autographed rookie card can be bought for $250 (as of July 2017), which could see a boost if he continues to play consistently as he’s already shown in his first three seasons in the big leagues.
CK