As of Friday, July 27, Giancarlo Stanton of the Miami Marlins is tied in the lead in home runs with 33 along with Yankees rookie sensation Aaron Judge. 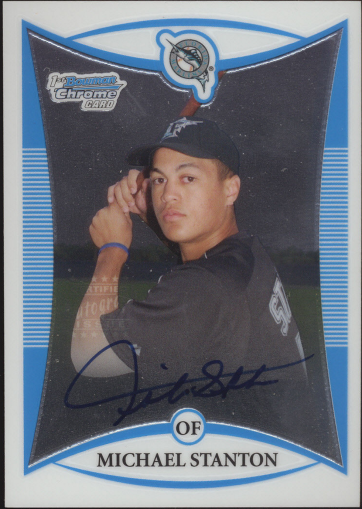 As written previously at fivecardguys.com, we all knew Stanton had legit power. But the question was whether he could put together multiple seasons without going on the DL for a sustained period of time.
To be fair, some of his stints on the DL were freak accidents. Still, whether controllable or not, Stanton needs to be on the field consistently to showcase his raw power and talent like he is this season.
While still risky to invest in a player like Stanton, the upside is there. And for those who want in, his 2008 Bowman Chrome autographed rookie card is a good place to start. Just remember to look for Michael Stanton, which is the name he first went by until he decided in 2012 he wanted to be referred to by his real first name: Giancarlo.
One ungraded card here is going for $179. One sold earlier this week for $149.99 while a BGS Graded 9.5/10 card sold for about $230 on July 18.
We know the power is real. Let’s see if he could remain in good health.
CK