Let’s give credit where it’s due. 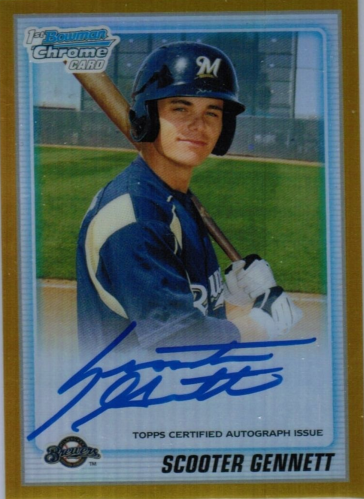 Anytime a player can accomplish an incredible feat like hitting four homeruns in one game like Cincinnati Reds Scooter Gennett did last night, it needs to be recognized.
Becoming only the 17th player to do so, Gennett also hit a grand slam being one of those four homeruns and racked up 10 RBIs.
Once a promising prospect for the Milwaukee Brewers organization, Gennett could never play up to the level of expectation scouts had for him. Eventually he was claimed off waivers by the Reds earlier this year.
It’s no surprise after a terrific one-game performance last night, more of his 2010 Bowman Chrome Draft autographed cards have been listed on eBay.
Unfortunately, Gennett most definitely played his best game and buying now would be buying high. The good news is that for fans of Gennett, his cards are valued reasonably especially his colored refractors.
An ungraded gold refractor can be bought for $150 (numbered to /50), an orange refractor numbered to just /25 is on sale for $300, and a base autographed card can be had for just $19.
CK