Hall of Fame Effect: Who will be inducted in the Class of 2018?

For some of the best sports card auctions currently listed, check out our Daily Auctions page, which is updated frequently!

Since the baseball Hall of Fame (HOF) made their announcement on Jan. 18 of who will be going to Cooperstown, we at fivecardguys.com have written a series of articles which analyze what effect the announcement may have had on the players inducted into the hall.
Thanks to tracking the average selling price of graded rookie cards of the 2017 inductees we have found that immediately after the announcement was made the average price received a significant boost of at least 20%, and in some cases, as high as 60%.
A 20-60% increase in any type of investment is a strong return, just ask anyone who is involved in financial investments. If we feel confident that whoever is accepted into next year’s hall of fame will also see a minimum 20% bounce in the valuation of their rookie cards, then the wise investor should start speculating who will be in the class of 2018 so that they can buy low on their cards today and sell high a year later. 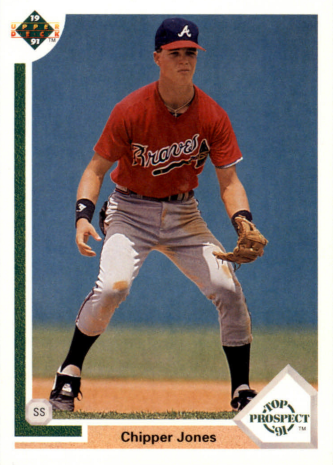 Here is our recommendation of who to buy now, based on who we predict has a high chance of being a part of the class of 2018.
Starting with players who will remain on the ballot after the 2017 voting, Hoffman and Guerrero have a very high chance of passing the 75% threshold in 2018.
Hoffman was expected to have a very high chance at being inducted this year, but fell just short of the cut off by being voted in 74% of the ballots. Even though voters tend to be very hard on relievers it is hard not to see Hoffman gain the extra 1% he needs to get in.
Guerrero may not have gotten into the HOF in 2017, but he should be very pleased to get over 71% of the vote in his first year of eligibility. It would be shocking if he did not get the extra 4% needed to cross the 75% threshold.
Outside of Hoffman and Guerrero no one else moved enough in 2017 to make them a lock for 2018. At least for the future, keep an eye out for Mike Mussina, Barry Bonds and Roger Clemens as their case to get into the hall took positive steps forward in 2017.
There is also a strong batch of newcomers joining the ball0t in 2018. Of the first ballot candidates, Chipper Jones should be a lock to get the call in 2018. One of the top 3rd basemen of all time, Chipper owns a 303/401/529 career triple slash line, along with 468 career home runs and a career WAR of 85 per baseball-reference.
The only other first ballot candidate that might join Chipper is Jim Thome. Thome hits all the milestones required for HOF admittance. He has 612 HR, 1699 RBI along with 276/402/554 triple slash line. The only problem: He played a third of his games at DH, and voters have not been historically warm to designated hitters since defense matters.
This might mean that Thome will get into the HOF in 2019 instead of 2018. Either way his cards will eventually get that HOF bounce. It seems to just be a matter of when. Omar Vizquel, Scott Rolen, and Andruw Jones are all worth keeping an eye on, but predictions are that if they get in, it will take more than a couple of tries.
In summary, if you want to buy low today and sell high after the 2018 HOF announcement here are our recommendations:
Lock: Trevor Hoffman, Vladimir Guerrero, and Chipper Jones.
Maybe: Jim Thome
DK