Everyone loves Cody Bellinger, the favorite to win NL Rookie of the Year honors

Hindsight is 20/20, isn’t it?
Back when Los Angeles Dodgers rookie Cody Bellinger was playing just to get a spot on the active roster, he found himself in a mini-slump, which resulted in a drop in price of his 2015 Bowman Chrome Prospect base autograph rookie card. 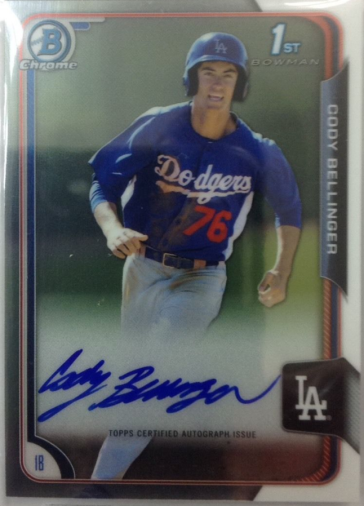 Then when he started getting regular playing time with regular first baseman Adrian Gonzalez on the bench nursing his injuries, Bellinger went on a tear and subsequently his value shot back up.
And the favorite to win National League Rookie of the Year honors hasn’t stopped hitting, just setting the record yesterday at hitting 21 homeruns in 51 games.
It goes without saying, if you’re looking to buy now, you are buying really high (one base autograph BGS Graded 9.5/10 just sold for $750).
He won’t obviously sustain this pace but if Aaron Judge’s rookie card is of any indication, Bellinger’s rookie card has only started its climb up to the potential peak of its value.
CK