A spike in Yankees Aaron Judge rookie card value in the near future? 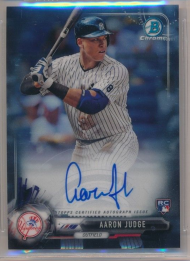 As he looks to tie then potentially break the record in the next week-and-a-half, his 2013 Bowman Chrome Draft could see a spike in value after steadily decreasing in the second half of the season.
Currently, a base autograph (BGS Graded 9.5/10) still available for about $600.
For something a little more affordable, his 2017 Bowman Chrome rookie base autograph card (BGS Graded 9.5/10) is going for $329.
Baseball fans and collectors alike will be watching to see if Judge can hit a couple more before the regular season is out.
CK